In May of 2015, I attended Book Expo America (BEA). Officially, I was there as a librarian, because publishers want to get their exciting new books into librarians’ grabby little book-loving hands so that we can read them and love them and buy them for our libraries, the better to put them into other people’s grabby little book-loving hands. Unofficially, I was also there as a writer with hopes of becoming a published novelist.

This is what I came away with after three exhilarating days at BEA, besides forty free books and a photo of myself with Dave Barry: the unshakeable certainty that I want this. Quest unlocked: Be an author at BEA.

National Novel Writing Month seems an appropriate time to talk about setting goals. After all, what is the NaNoWriMo challenge but a goal? Writers set goals all the time. The small ones that we can deliver for ourselves: write so many words every day, finish this short story, submit to this magazine. The big ones that might take a little luck or a little help: get an agent, get published.

“Be an author at BEA” is a big goal. It’s not the kind I can bang out today if I just stay focused and keep my butt in the chair. It’s the kind you might also call a “dream,” the kind that makes the focus and the butt-in-chair time worthwhile. We all have those, right? Even if we love writing for its own sake, we can’t help imagining finding whatever we call success. Reaching readers. Bringing joy. Making a difference in someone’s life. Maybe, someday, making someone want to meet you because you wrote that book.

Of the over six hundred authors at BEA in 2015, many were superstars. Katherine Applegate. Louis Sachar. Maggie Stiefvater. R.L. Stine. Meg Cabot. Huge lines of fans waited for a quick word, a signed book, and a photo op with these people. I should know: I literally sprinted through the convention center to be first in line for Katherine Applegate, also known as K.A. Applegate*, also known as the author whose Animorphs series was basically my entire life when I was a tween. 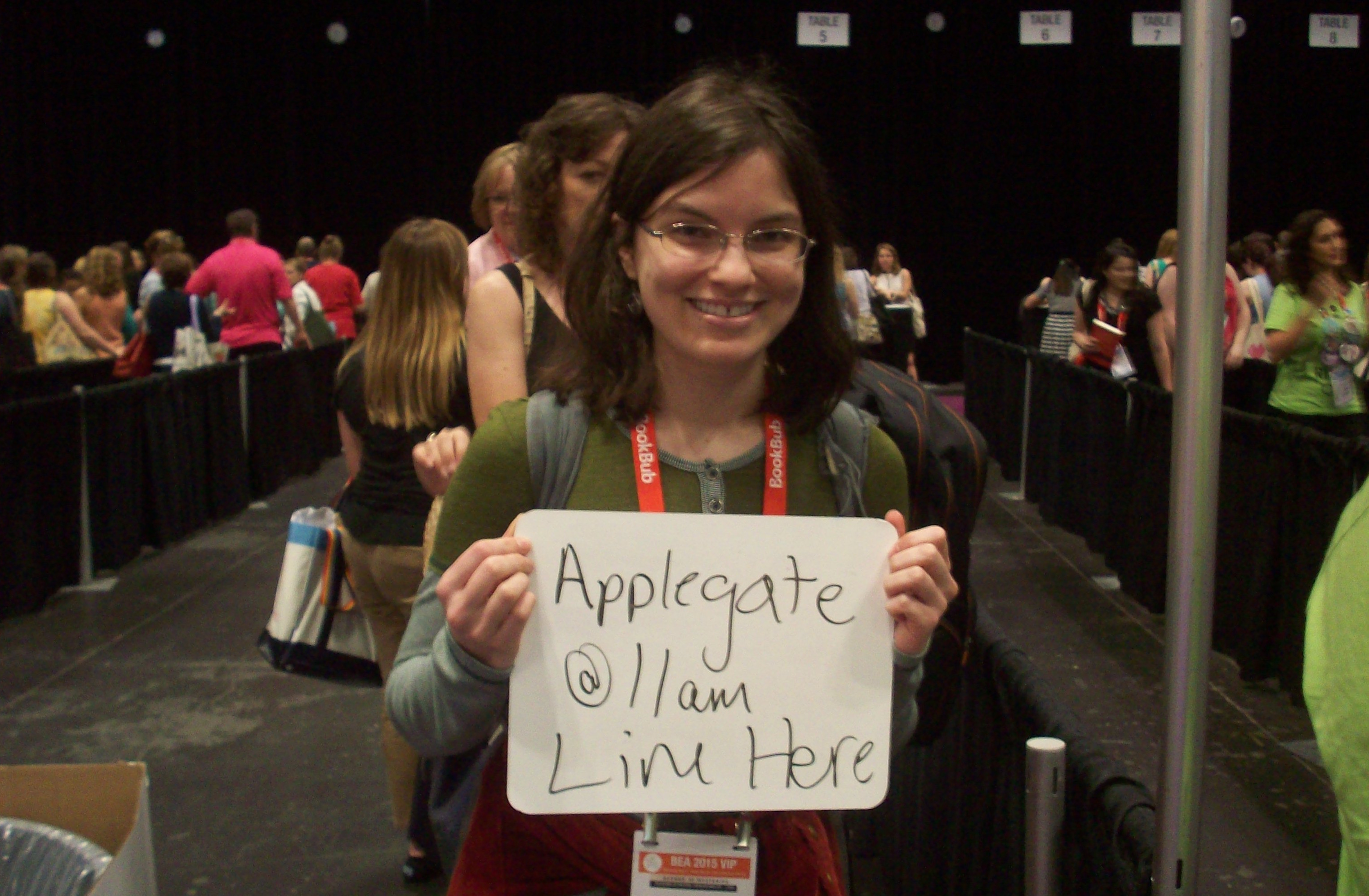 I won’t pretend that I wouldn’t love that kind of reception. But it’s not the celebrity status of these authors that made me swoon. Indeed, many of the authors at BEA are relative unknowns. They don’t have tremendous lines, and they aren’t there to sell books – if anything, they’re giving away books and swag. So why do they make the trip? They hope it will increase their exposure and future sales, surely, but I think it’s more than that.

It’s about picking up a postcard advertising an upcoming graphic novel by a first-time author, and being able to tell that author that it looks amazing. Because I want creators to hear that fans appreciate seeing a beautiful comic starring people of color.

It’s about spotting a tower of copies of City Love by Susane Colasanti, picking one up, and having the woman standing next to me say, “Would you like me to inscribe that for you?” then getting into a whole discussion over her book Keep Holding On. Because it’s amazing to actually talk with an author whose work you like about how she created that work.

It’s about waiting in line to put my grinning face in front of Todd Strasser, who has written acclaimed books on topics like homelessness and school shootings, and tell him that as a kid I loved his novel Help! I’m Trapped in Obedience School, which is about a boy who switches bodies with his dog**. Because authors should know that it’s not just their critically-hailed books that are important to readers.

Something in my writerly, readerly brain locked onto these connections. There was no methodical goal-setting progress here. Just, this is what I want.

Sure, authors and readers can come together in a million places. Conferences, book signings, even online. But BEA is specific, like a good goal should be. It’s something I can picture when I need a boost.

Goals like this can be scary, because they aren’t completely within your control. You can’t make people love your writing, buy your book, know your name. But it’s worth dreaming these dreams. There’s a reason the saying is “shoot for the stars,” not “shoot for the slightly ambitious but totally achievable target.” The truth is, you want to do both. Set little goals that keep you moving and big ones that keep you inspired.

And sometimes, embrace a goal that you didn’t deliberately set at all. Sometimes, you don’t know you want something until you see it. Then you experience what I did at Book Expo America: a goal finds you, grabs you, and says, “Come and get me.”

Go and get it. 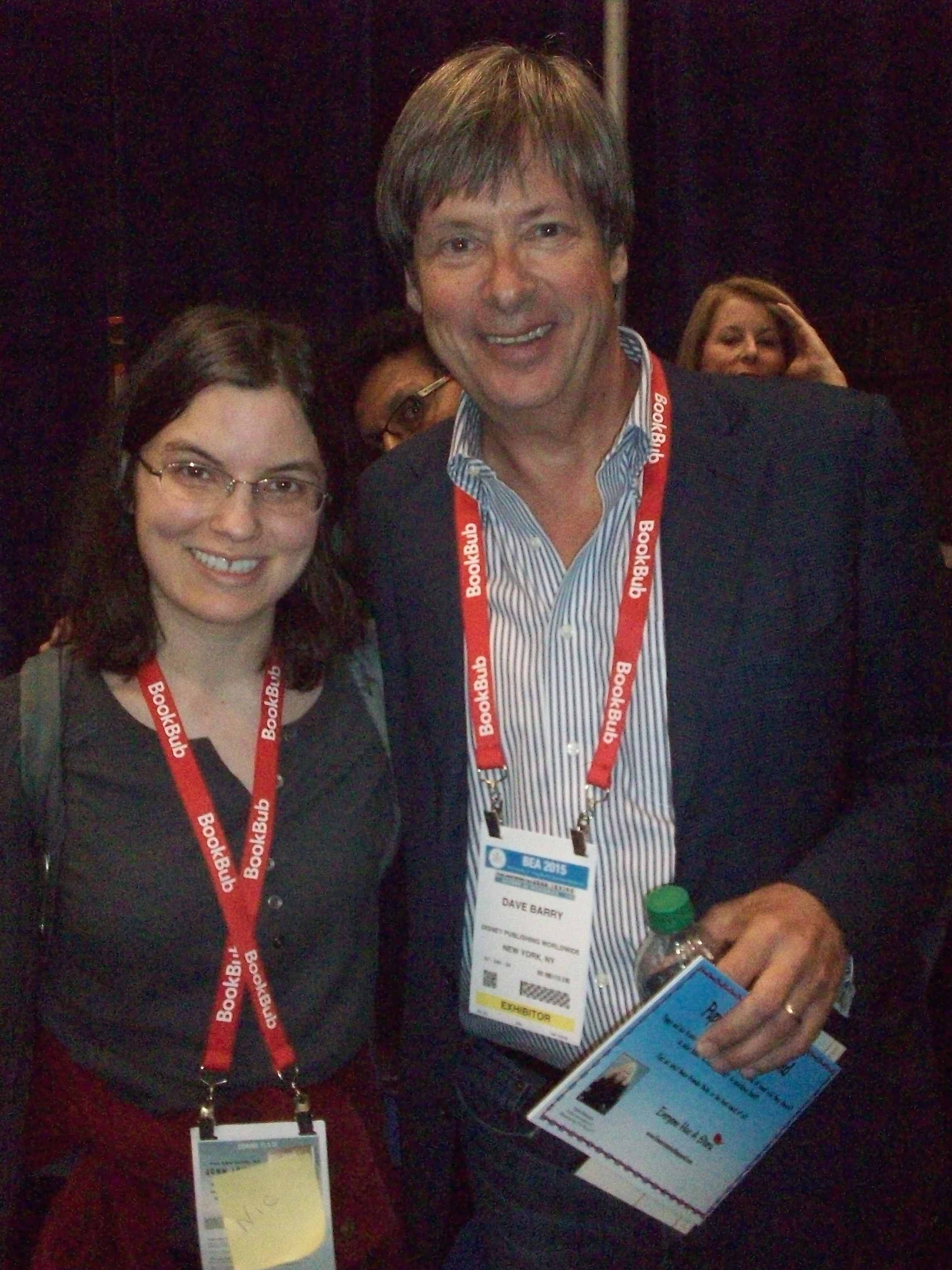 Anica Lewis is a Youth Services librarian as well as a writer and reader, the better to squeeze more books and bookish people into her life. As you can see, she really did get her picture taken with Dave Barry.

*I was going to abbreviate “also known as,” but then realized that would give me “a.k.a. K.A.,” which starts to be just silly.

**And, of course, its unforgettable sequel, Help! I’m Trapped in Obedience School Again.