NaNoWriMo Day #29 – My Journey to the Center of Publishing, A Surivival Guide

November 29, 2016 / redsofaliterary / Comments Off on NaNoWriMo Day #29 – My Journey to the Center of Publishing, A Surivival Guide

If you’re a writer, you’ve been there. You go to a gathering of fellow writers, be it a workshop or maybe a local conference, and you meet people who have already achieved that dream-come-true goal you’ve set for yourself. You know what I’m talking about. If you’re unrepresented, the person next to you casually drops into conversation, “Well, my agent said….” If you’ve landed that agent, the writer you chat with in the elevator mentions his book deal. If you get that book deal, the debut author you see on the panel crows about her three-book deal with a major house that comes with a personal chef. I’m kidding about the chef, of course, but the point I’m making is the sooner you let go of any preconceived notions of what your path to publishing looks like, the happier you will be.

LESSON #1: DO NOT COMPARE YOURSELF TO OTHERS;  IT IS A WASTE OF TIME

If you’ve been in the query trenches, you know the agony of waiting, and waiting, only to get a few (or many) rejection emails before hopefully finding success. My first rejection sent me scurrying to a CP’s house with a bottle of wine, wondering why on earth I ever thought I could write. The second rejection ended with a glass of wine at my desk. By the tenth, I felt like Lieutenant Dan in Forrest Gump, laughing at the publishing gods who thought they could discourage me! By the grace of JK Rowling, I would show them!

LESSON #2: LEARN TO LAUGH AT YOURSELF AND THIS CRAZY BUSINESS

The feedback I received on my book was very encouraging (I could write!), but several agents said the market/genre for that book was over-saturated. Okay, fair enough. Vowing to take control of what I could, and accept that which I could not, I decided to write a new book. My second book would avoid any genre that might be glutting the market (i.e. don’t follow trends!). With that in mind, I dove into my next novel.

LESSON #3: YOU ARE A WRITER; KEEP WRITING

My second book had been beta read and critiqued many times, thanks to all the many wonderful and generous writers I connected with at conferences, workshops, and online. I had continued to research agents and followed my favorites on Twitter. I knew what I wanted in a representative, and where my book fit into the marketplace. But first I thought I’d give Pitch Wars a try (if you are unfamiliar with this awesome annual writing event, run to Twitter and look up the hash tag). I was already a pro at researching agents; maybe I could apply the same criteria to researching Pitch Wars mentors.

LESSON #4: SOMETIMES A SHOT IN THE DARK HITS THE MARK

I was chosen as a mentee in Pitch Wars! I would have the awesome Lindsay Currie, a talented published author, as my very own Professor Minerva McGonagall. I spent two months absorbing every bit of knowledge she was willing to share, and revised my book under her expert eye. By the end, I’d produced the best book I possibly could, and it was time to query.

LESSON #5: THERE’S NO SUBSTITUTE FOR A POLISHED MS

My query and pages got immediate attention. It didn’t hurt that I could say I was a Pitch Wars mentee, but it was the years of practicing my craft, of being open to criticism, and to continuing my education that shone in those pages. Pretty soon I had interest, which turned into offers. Timeline from when I started my first novel (I had been writing in other formats for years) to accepting an offer from my fabulous agent, Dawn Frederick: 3 years.

LESSON #6: BURN YOUR CALENDARS;  THEY ARE MEANINGLESS IN PUBLISHING

I now had a partner I believed in. It was time to trust her to do what she did best, while I did the same. Being on submission is about as much fun as querying, so I put it from my mind. I didn’t bug Dawn for updates or stalk her Twitter feed for clues. I simply rolled up my sleeves and focused on writing my next book. I drafted, revised, swapped mss with critical partners, and revised some more. When my next book (this was book number three in case you were counting) was finally shiny as a new penny, I sent it to Dawn. The book she’d signed me on had not yet found a home, but she had high hopes for the new book.

LESSON #7: DON’T WAIT FOR YOUR CURRENT BOOK TO SELL BEFORE WRITING THE NEXT ONE

Eight weeks after book three went on submission, it had an offer. I would soon be a traditionally published author! The contract was signed, the editors I worked with were terrific, and they even asked my opinion on the book cover. It was time to purge my computer history of advice for writers on submission and start Googling advice for debut authors, but who knew there could be so much information! I found posts on cover reveals, social media etiquette, GoodReads, troll warnings, blog tours, Amazon algorithms, language sensitivity, book signings, author photos, etc, etc. I soon realized there was a difference between being prepared and being overwhelmed, so I became laser focused in my research. I also try not to worry about something that may or may not happen a year from now.

LESSON #8: RESEARCH AND PLAN BUT DON’T FORGET TO ENJOY THE PROCESS

Curiosity Quills will publish my debut novel, A Dangerous Year, in April 2017. I have joined an online community of fellow debut authors where I have hopefully contributed as much wisdom and support to them as they have to me. Several bright teenage bloggers have reached out to me for interviews, and I’m excited about all the future conversations I get to have with them. My 2017 calendar is filling up with conferences and conventions, and I can’t wait to meet the many people whose online friendships have meant so much to me. I plan to arrange book signings, and fervently pray someone other than my mother shows up.

Oh, and I’ve just finished my next book. 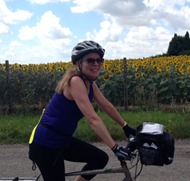 Growing up in the “company town” of Los Angeles, Kes Trester‘s first job out of college was on a film set (which shall remain nameless because it was a really bad film. Really.).  Determined to combine her love of reading and writing with the excitement of Hollywood, she became a film development executive, which meant she got to work intensively with some of the best screenwriters around. (Best. Job. Ever.)

Kes worked on a variety of independent films, from gritty dramas to hot vampire love stories (long before Twilight!) to teens-in-peril genre movies (where they bought fake blood by the gallon on those babies).  She can’t claim any film classics on her resume, but has tons of unprintable stories! During that time, Kes had the opportunity to work with wonderful writers who taught her everything they knew about structure, dialogue, and character development.

As a producer her film credits include the feature film TRUE RIGHTS and the short film UP ABOVE THE WORLD SO HIGH, both award-winners on the festival circuit.  As head of production for ZOO Films, Kes supervised the budgeting and production of national television commercials and award-winning music videos for artists such as Radiohead, Coldplay, and OKGO. I even made a shampoo commercial with J Lo.

Kes won the 2015 Sue Alexander Grant from SCBWI for her (then) work-in-progress manuscript A DANGEROUS YEAR. As a freelancer, she creates director’s treatments for commercials, produces creative content for websites, and critiques feature film scripts.  Her first entry in the Riley Collins Series, A DANGEROUS YEAR, will be published by Curiosity Quills in 2017.