NaNoWriMo Day #16 – I write because I can’t stop myself

When I was a kid, I spent hours and hours reading. Oh, I did it outside sometimes so I didn’t get yelled at about getting fresh air, but it was all books for me. Books in trees, books under the covers with a flashlight, even books while walking (which my family still teases me about that). However, I never wanted to be a writer. I saw the stress people were under when they took a hobby they loved and tried to make money off of it. I never wanted to do it.

I sat in class after tests were finished and dreamed up stories in my head, but I didn’t write them down. When I had to do reports or write things for class, I always got high marks. Teachers told my parents I should write, but I wanted to perform other people’s stories. I refused to write. I was obnoxious. They stopped asking for a while.

As an actor, I was free to dream up backstories for my characters. Later, as a makeup artist, I wove tales around the body painting I did, or imagined scenarios for my clients where their ethereal look would bring them notice or power or love. I just wouldn’t write them down. In my downtime, I watched documentaries about the past and thought of what the day to day life was for the people involved, but again, nothing on paper. I didn’t want to ruin what I loved so much. I complained when I was forced to learn to type because, as an actor, when would I do that? Silly girl.

One day, out of the blue, a friend asked me to interview Jack Nicholson and Morgan Freeman because he knew I was comfortable on camera. I said yes, because I’m not insane. It went well, and so he asked me to review the film I interviewed them for. Ah, here it was. Writing. I almost said no, but I stopped myself. I mean, I was getting paid, and the guy let me talk to celebrities. It was the least I could do. I wrote and rewrote that 700 word review for three days straight. I agonized over it, but a horrifying thought hit me. I loved this. I loved creating phrases. I loved ripping my work apart and redoing it. I even loved the sound of the keys when I typed. There is something so satisfying about those clicking noises. I was being sucked in. Even more enticing? Someone cared what I thought!

Over the years, I’ve written thousands and thousands of articles, and I never get tired of it, but there was still a little corner of my brain that wouldn’t let me do fiction. Opinion pieces were fine. I opined all over the place. I spoke on panels, on television, became a crusader for women in the geek world, but still, my stories were mine. I script doctored for my friends. I wrote chapters in non-fiction books about fictional characters, their psychology, their thoughts and spoke to their creators. Still, no fiction. It was my little corner of happiness, and no one was going to put “work stuff” on it. My boyfriend, his mother, my friends, my mother (who was happy to bring this up again), everyone and their mothers told me I should write a novel. Nope.

Nope was always my answer, until one day when someone offered me a chance to pitch a story to a company. I didn’t think it was a big deal. We were really there for my boyfriend and his pitches. I came up with one as a lark. A story about an historical woman with a supernatural twist. No one was going to take that. Especially not the people I was pitching to…except, they did. Well, now I was stuck. I didn’t sleep for days, thinking that I was giving up the one refuge I had. After getting non-stop death threats during gamergate and constant harassment because I dared to write about women playing video games and liking superheroes, even the non-fiction writing I enjoyed was getting dangerous. Actually physically dangerous. How was I going to open up and let my stories out?

So I went for a hike. It was the easiest place to think, away from my computer. Did I want to do this? Could I? What would I be giving up? I said “nope” out loud so many times that other hikers must have thought I was a bit touched. At the top of the hill, all alone, the opening line came to me. I spoke it into my phone without thinking. Then another happened. Then a few scenes. Then the stuff in between.

Well, I wasn’t writing, right? I was talking.

I wrote half the novel that way. In six weeks, it was just suddenly there. I couldn’t stop. I had to take time off because of my day writing job, but it’s on the way to being done, and even when I wasn’t writing, I was dreaming up what to say. I couldn’t stop myself. I think the story was in there the whole time, just waiting for me to finally give in. It’s been waiting for a long time.

I can feel the other stories shoving their way forward, telling me that I never really needed a refuge. The stories I created in my head were going to come out one way or another. The refuge was reading. The writing was what I was supposed to be doing all along. Heck, I was doing it every day, all day anyway. They’ve waited long enough. I write because I’ve waited a long time to do so. I write because I can’t stop myself. I write because some stories just aren’t going to stay in any longer. I still have my covers and my flashlight. Maybe someday another little girl will do the same thing with my stories. Knowing that, well, that is why I write. 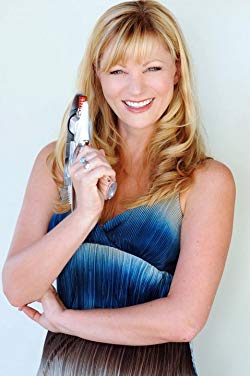 Jenna Busch is an American entertainment journalist known for her work on sites like IGN, Huffington Post, Coming Soon, JoBlo, SheKnows, Collider, and Stan Lee’s World of Heroes. She is currently the co-host of the weekly entertainment web series Most Craved. Jenna frequently speaks at conventions and appeared on NPR, Al Jazeera America, The Young Turks Network, G4’s Attack of the Show and Seasons 1 and 3 of Wil Wheaton and Felicia Day’s Tabletop. Jenna is the creator of Legion of Leia, a website and initiative to promote women in sci-fi.