November 20, 2019 / redsofaliterary / Comments Off on Day #20 NaNoWriMo – THE PRIORY OF THE ORANGE TREE BY Samantha Shannon

“Don’t judge a book by its cover” is valuable advice, of course. But sometimes you’re in a bookstore and you see a novel that looks thick enough to stop a bullet. You’ve never heard of this book before. You had no idea it existed. It’s got a striking orange cover with a blue dragon, scaled and spiked, wrapped ominously around a medieval-style tower. The title is arcane and mysterious, and while you’re not familiar with the author, you trust her immediately. Anyone who’s got an awesome, angry dragon on their book must be doing something right. So you stare at it for a moment, transfixed, not even bothering to read the inside flap before you turn to your friend and declare, “I’m going to absolutely love this book.” 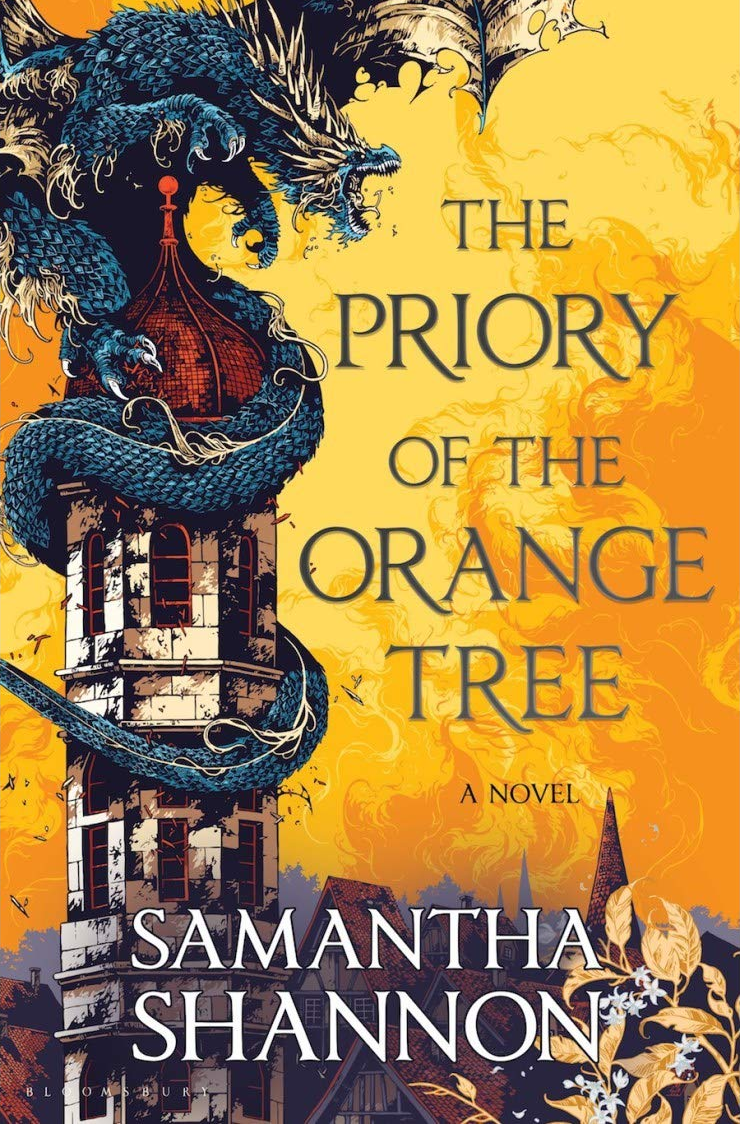 And friends, I did. THE PRIORY OF THE ORANGE TREE by Samantha Shannon was a delightful surprise. I dreamed so many dreams when I saw that cover, my mind alit with visions of fantastical adventures, unique locales, and epic battles. The book provided all of that and more. I saw it in the spring and saved it for the summer, when I like to take a week off and read the books I’m most excited for each year. I’m not a huge fan of “going places” or “doing things,” so my ideal vacation involves sitting in the summer shade and getting lost in big, fun novels. This was a perfect book to get lost in.

The world is vast and very much at odds, and dragons are at the heart of this divide. Dragons are worshipped in the East, where a young woman trains to become a dragonrider. Dragons are hated in the West, where the royal bloodline prevents the return of the Nameless One, a monstrous dragon who will devour the world. The East and the West are divided by the sea, and want nothing to do with each other. Neither of them care to interact with the nations to the South either, where dark forces seem to be gathering.

Everything about The Priory of the Orange Tree screams high fantasy at first glance, and that holds throughout the book. There are maps, plural, at the start, and you need them to understand the complicated geography of this expansive world. Each nation has its own structures and cultures, and characters have names like Eadaz du Zāla-uq Nāra and Queen Sabran Berethnet IX. It’s got a classic feel that will resonate with old school, Tolkien-style fantasy nerds like myself.

However, there’s much more to it than that. Most classic high fantasy tends to be very male-dominated. Also, very white. Also, very straight. Also, kind of racist and imperialist and just persistently problematic.  Shannon embraces the trappings of high fantasy, but leaves all of these issues behind in favor of a modern, inclusive approach. The lead characters are women, and they all defy the narrow limitations for female characters in traditional fantasy. One is a queen, one is a soldier, one is a spy, and they drive the action of the story with their own distinct, compelling motivations. They are of different ethnicities as well, and they combine with the larger cast of characters to represent the diverse corners of this world. A queer romance is a key storyline throughout, and queer content is woven through the backstories of some secondary characters as well.

While Shannon is hardly the first author to modernize a high fantasy framework, it’s a trend I’m happy to see continue, especially in such excellent fashion. The book is engaging from start to finish, making the most of its 800 pages to explore the space to the fullest and hit as many fun elements as possible. It’s got cool magic, with all sorts of specific rules and requirements. It’s got pirates, brigands, traitors, and all of the other nefarious characters you want to try to ensnarl our heroines. Plus it’s got dragons. So, so many dragons. Good dragons, bad dragons, water dragons, fire dragons, all involved in epic aerial battles.

Beyond the spectacle and adventure, Shannon’s created a fantastic cast of characters who ground the story. I was as invested in their smaller, personal objectives as much as I was in the world not ending, if not more so. I mean, I’m not new. The good guys tend to win. But would [redacted] get back to [redacted]? And would she even trust her again if she did?! That’s what really kept me turning the pages. The characters and their complicated, messy relationships are the heart of the book, and all of the lore and quests and whatnot only serves to enhance them.

Many of the big, lauded fantasy novels in recent years have reinvented the genre from the bottom up, which is great and has resulted in some amazing books, but Shannon’s hybrid approach hits such a perfect sweet spot for me. The Priory of the Orange Tree is an old school meets new school amalgam that fully captures the best of both worlds. There’s a nostalgic element to the structure and style that is elevated by identifiable, representative characters who are wonderfully realized. I loved every second of reading it, and I think that you will, too.

Tim Hanley is a comic book historian, and he blogs about Wonder Woman here at Straitened Circumstances and also writes about women in comics at The Beat in his quarterly “Women in Comics, By The Numbers” column.  He has a Master’s degree in history from Dalhousie University, writing his honours thesis on DC Comics and the 1950s juvenile delinquency crisis and his Master’s thesis on Wonder Woman and feminism.  He’s kind of a nerd, really.