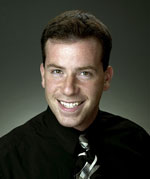 With each new installment of the Red Sofa Chats, I am reminded yet again of why I love my job – and why it’s such a treat to work with the various individuals I’ve met over the years in the world of book publishing.

Imagine my excitement when Chuck Sambuchino agreed to join the chats!  I’m a fan of Writer’s Digest, and how WD has contributed to the successes (and future successes) of aspiring authors.   Chuck is one of the people behind the scenes at Writer’s Digest, and I’ve always appreciated his sound advice to writers – whether through the WD website, the books he edits, and/or via Twitter.

Chuck, thank you so much for joining the Red Sofa Chats!

Bio:  Chuck Sambuchino is an editor and a writer. He works for Writer’s Digest Books and edits GUIDE TO LITERARY AGENTS (guidetoliteraryagents.com/blog) as well as CHILDREN’S WRITER’S & ILLUSTRATOR’S MARKET. His humor book, HOW TO SURVIVE A GARDEN GNOME ATTACK (gnomeattack.com), was released in Sept. 2010 and has been featured by Reader’s Digest, USA Today, the New York Times and AOL News. Besides that, Chuck is a produced playwright, magazine freelancer, husband, cover band guitarist, chocolate chip cookie fiend, and owner of a flabby-yet-lovable dog named Graham.

1. Why did you choose to be an editor, as well as a writer?

I chose to be a writer because I’ve enjoyed telling stories for as long as I can remember. It seemed like a logical extension of that. It isn’t realistic for me to write full time, so I became an editor to establish a career and meet other writers, etc. I have found that full-time writing is very feast and famine, and after a while, you want a little stability in terms of hours and paychecks.

2. From my own personal observation, I see you as an advocate for writers. What inspired you to take this role?

Everyone at Writer’s Digest and Writer’s Digest Books is an advocate of writers and a fan of writing. I just happen to be more visible than most and travel to more conferences than your average staffer. I’m very lucky to work at WD Books, because if I have to be an editor in an area, what better area than writing/publishing? I meet the best people.

3. What are you reading right now (for fun)?

I am a huge Van Halen fan and just finished Sammy Hagar’s memoir, RED. I want to start THE VAN HALEN saga. However, right now I am reading Matt Baglio’s THE RITE, a true story of a California Catholic priest undergoing exorcism training in Rome. Spooky stuff. [ Chuck, I had no idea you were such a Van Halen fan!  Fantastic! 🙂 ]

4. How do you utilize Twitter? How do you believe it has changed the way we go about publishing books?

I don’t tweet nearly as much as I could from my @chucksambuchino account, because I tweet a lot from the @writersdigest page, which has 155,000 followers. The only way I really “utilize” Twitter that is different or unusual is that I tweet the same posts at least 4 times if not more. I believe that 99.5% of all posts in my feed go unnoticed by me because there is so much.

So I have decided, especially when tweeting as part of WD, to tweet the same stuff several times so more people can see it. Another way Twitter has helped me is the way it has allowed me to connect with new, interesting writers. My blog is run mostly by awesome guest columnists, so I need to be in touch with lots of awesome writers to contribute content. Twitter is a great meeting place, and most people are happy to communicate with me.

In terms of how it is changing the industry: I think Twitter just reinforces the fact that we are a culture addicted to the Internet, with less patience and less time. We are bombarded by distractions and quick fixes, which means less time reading books. One good thing Twitter has done is allowed the spread of information to happen quicker and better. I now learn of books and authors every week through Twitter. It’s Publicity Nuvo. That is pretty cool.

5. If you had a crystal ball, where do you think (or hope) publishing will be in 5 years?

I think there will always be a large place for traditional publishing and hardcopy books in the mix. In terms of more people e-publishing their books, it will be interesting to see 1) how the Internet will create channels so that the best stuff can get reviewed and break out; and 2) if and how the general public will begin to seek out more stuff that was e-published.

I dunno. I feel like there are much smarter people than me in this “futurist” arena, but everyone just seems to be taking guesses. We’ll see what we see. The biggest thing writers should worry about is crafting an excellent story.

Thanks for having me on Red Sofa Chats!

-Questions? Comments for Chuck? Let us know what you think!

An additional incentive, Chuck will be giving away a free copy of the 2011 GUIDE TO LITERARY AGENTS. Any comment or questions put your name in the drawing. The winner will be “drawn” in two weeks! Trust me, you want this book 🙂