“Patrice,” my then-agent said. “Susan Allison of Penguin wants to talk to you about publishing Gordath Wood.”

It had taken me five years to write the first book in my fantasy series. Five years to write, revise, repeat. Then began the yearlong query process. I meticulously logged my query letters and the agent responses. I gave myself a year — if after the year I got no bites, it was time to shelve Gordath Wood and go on to another project. Toward the end of the year I got representation, and a month later, she got a call from Penguin.

In 2008 Gordath Wood came out; just in time for the worst economic downturn to hit the world since the Great Depression. Gordath Wood made a respectable showing for a first novel, but the followup, Red Gold Bridge, sank like a stone. The publishing industry was running scared, and no one had time for an unknown author who wasn’t an immediate best-seller.

In 2011 I sold a standalone novel, The Unexpected Miss Bennet. In 2012 I self-published The Crow God’s Girl, the third book in the series that began with Gordath Wood. In 2013 I had a long hard talk with myself.

It hadn’t been solely Penguin’s fault for the demise of my first very unbrilliant career. I am a slow writer, I didn’t take advice, and I focused on an unsellable novel (The Crow God’s Girl). What if I tried again, but this time did it the smart way? What if I develop a more marketable project and focus on jumpstarting my career? Note that I wasn’t trying to write to market — that works for only the fastest and most prolific authors, and I am neither fast nor prolific. I can write a first draft in a year, but it takes at least 18 months for me to produce a finished manuscript.

I had been writing about The Sisters Mederos in various iterations since 1996, when I first wrote about Tesara Mederos in a short story called “A Heart for Magic.” Very little of that original short story remains in the current work, but the seed of it is in there. I knew that I wanted to write about sisters, because that’s a relationship that was hardly ever mentioned in fantasy. I wanted to write a fantasy that incorporated Jane Austen-esque style and setting, because of the success of The Unexpected Miss Bennet, and because I thought it was fun.

At this point I needed to also find an agent. because my original agent and I had parted ways after my career tanked (in retrospect, this was another thing that was my fault). So I began the agent search again. And I wrote the second book in the series while trying to find representation.

When I signed with Jennie Goloboy of Red Sofa Literary, that was just the beginning. Jennie is a partner who reads and critiques my drafts and provides excellent insight and advice. So Career reboot Rule 1: when you get a fantastic editor, you listen to her.

Career reboot Rule 2. Be patient. I knew going in how long this was going to take. I knew that the books might not sell, and it wasn’t the end of the world, because I had other projects I wanted to write.

Career reboot Rule 3. Start a new project while the agent is pitching the first project. I have a day job, which provides financial security, even if it means I have less writing time than I would like. It’s a trade off I can live with, believe me. Some people can manage just fine with insecurity — not me. “Be regular and orderly in your life that you may be violent and original in your work,” said Gustav Flaubert, and that’s my motto too.

Anyway, an unexpected layoff with excellent severance pay gave me the best of both worlds. Plenty of time to write while I was still getting a paycheck. So I made a start on a new project.

In the meantime, Agent Goloboy (it sounds so cool, doesn’t it?) continued to pitch the novel, and the rejections racked up. The rejections were pretty good though — the encouraging, thoughful kind, the ones that said we were on the right track. It was disappointing, especially the ones that were so close, and it got a bit hard to stay optimistic, but I reminded myself that one book is not a career. If this didn’t sell, I had another project in the works.

At the end of August I got The E-Mail.

There are a lot of things that are out of a writer’s control — the market, how his or her book is perceived by editors, even whether editors have seen too much of type of story. But what we can control is our attitude, our professionalism, and our goals. My goal was this — to write the books I wanted to write while at the same time being okay with the fact that publication was not guaranteed. This time around I had the benefit of experience. I knew exactly how hard it was going to be and the only thing I could do was be patient, to continue to write, and to make sure that I had my eye on the brass ring — not the sale but the career.

I don’t think I’ll ever get jaded about having a book come out, a book I can hold in my hands. I know from experience how good that feels. One of the things I loved the most about writing Gordath Wood was hearing from readers about how they stayed up way past their bedtime to finish it. I’m looking forward to giving readers the same sort of experience with The Sisters Mederos and its sequels, and the new project, and on and on. I’ve been given a second chance and I’m not going to take it for granted. 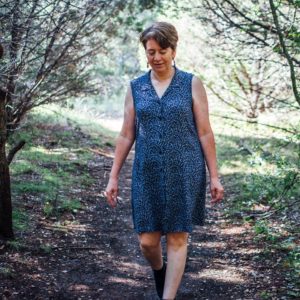 Patrice Sarath is an author and editor living in Austin, Texas. Her novels include the fantasy series Books of the Gordath (Gordath Wood, Red Gold Bridge, and The Crow God’s Girl) and the romance The Unexpected Miss Bennet. Her latest fantasy series in The Tales of Port Saint Frey, coming in 2018 (Angry Robot).