NaNoWriMo Day #26 – Writing one story at a time

I was in a library, I should mention, and it was somewhere close to one in the morning when I looked up from my laptop and a somewhat skittish patron sauntered over apologetically. Since I work in said library and it was kinda-sorta-maybe my idea to keep the place open overnight to kick off NaNo 2016 with a bunch of fellow writers, “toilet overflowing” was most definitely on the list of things I was responsible for.

So I closed my laptop and, along with a co-worker, I checked out the situation. By the time we figured out we really couldn’t do a damn thing about the overflowing toilets, my whole writing groove was broken.

So were the toilets, incidentally.

More importantly, though, I wouldn’t get back on my writing track until the very wee hours of the morning. Which brings me to my goal that night.

I know NaNo is about writing a novel, but I’m a short story guy, and my intention was to start and finish one such piece during the overnight at the library. I was working on a book of short stories (that I would eventually break out and send to magazines instead), and I thought an entire night of uninterrupted writing would produce—at the very least—one story. You know, with a beginning, a middle, and an end. And maybe some nice character development along the way. It was Halloween night (or, at least, it had been when I clacked my first key), and spooky is my jam, so I wanted to write a creepy little tale.

Despite the true Halloween horror of overflowing public library toilets and what they did to the walls that night, I eventually met that goal and banged out a pretty decent little yarn about a flea market, a witch, and an aging hipster named Alan.

Goal-setting is super important, obviously, and it’s one thing I’m super bad at. As I’m writing this, I’m actually doing so to distract myself from a looming deadline for a book that’s due on Monday. (It’s Saturday night—well, evening, really—so I still have some time, but you get my point.) My first draft is due Monday and up until now, I’ve been good about keeping my pace with deadlines. As it stands, I’m probably close to 90 percent done, but I would have rather polished this off and sent it out earlier in the week. Still, deadlines make goal-setting easier, as a deadline is essentially just a someone-else’s-mandate of a goal.

Setting goals for things that have yet to be sent out into the world tends to be a little tougher for me.

I’ve worked in many jobs, from publishing to corporate to now library-ing, and goal setting is always this somewhat nebulous concept that begins in a new fiscal year and doesn’t ever really seem to end. Things change, jobs shift in description, toilets overflow.

But with my writing, especially, goal setting takes on a new level of importance. Because it’s still the thing I do at night and on weekends and I have a budding family, the writing time needs to be pretty structured in terms of hammering things out. (And, just to clarify, by “budding family,” I mean that my wife and I adopted a 36-pound ball of Border Collie fury named Harlan—yes, after that Harlan—and he needs both constant attention and constant exercise. But he’s awesome.)

Speaking of Mr. Ellison, his buddy Ray Bradbury used to say that you should try to write one short story a day for an entire year. I followed that advice as best I could for as long as I could, but now I’m more in the camp of writing one or two per week. And if it’s not a short story, then it’s an essay, or a comic book review, or even just a chapter of a larger thing or a pitch for something new or whatever. I like working on multiple things at once and switching between them to keep the ideas fresh and to keep my mind from wandering. And that kind of goal setting has helped a lot and has made it easier to sit down and actually have something to say at the keyboard.

For NaNo, especially, setting goals is crucial because hey, listen—writing a novel in a month is kind of crazy. But unwinding a scene or two a day for a month? Now that’s downright doable. Laying down the bones of a SF-horror-noir-urban fantasy with a pizza-making warlock dog as the lead? Yeah, sure, now we’re talking. So go ahead and set goals, however nebulous or tenuous they may be. What’s important is that you actually meet them, and then you move on from them. Because it’s always onto the next, right?

Speaking of onto the next. It’s high time I meet my latest goal and finish this book about the Titanic. Don’t worry, I won’t spoil the ending. 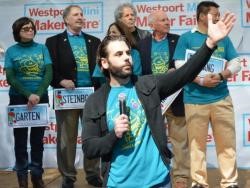 In many respects, Alex Giannini has led a ridiculous life consisting of equally preposterous careers. From Little League fields to college baseball, from the most expensive traffic violation in recorded Syracuse history to living in Italy, from editing books on knitting, sewing, and framing houses to writing about, traveling with, and being threatened by, professional wrestlers, from publishing a children’s book (Sarah Faire and the House at the End of the World) to then raising an obscene amount of money on Kickstarter to do a second printing of said book. Eventually Alex gave up on any real chance at a career and decided to just be Batman.

When that went sideways, he applied to a job at an exceedingly popular and award-winning public library in Connecticut and eventually took over its MakerSpace. Alex Giannini is currently having way too much fun in his role as the Westport Library’s Manager of Experiential Learning and co-chair of MakerFaire Westport. In his spare time, he thinks about how nice it would be to have more spare time.