Having to choose one favorite read from 2019 has proven quite difficult.  There are so many good reads out there from some of my favorite authors – Alex Flinn, Sarah Dessen, Tiffany Jackson, Angie Thomas, Rachel Caine, just to name a few – but I finally settled on not just a favorite book, but a new favorite author.

I became a member of NetGalley this year, and was privileged to discover an ARC by a very talented writer, Shaun David Hutchinson.  His 2019 fiction release was The Past and Other Things That Should Stay Buried.  I loved it.  I had just finished binge-watching the TV series Six Feet Under and there was so much of that vibe in The Past.  But as much as I loved the fiction, if I had to name only one favorite read from 2019, it’s Hutchinson’s memoir, Brave Face. 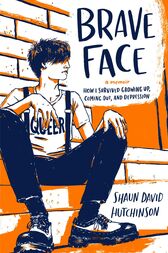 It takes a lot to put your actual life on the page for people to read.  And Hutchinson’s story about discovering your true sexuality and having to accept that you’re not the way you’re “supposed” to be, especially in the 1990s, was hard to read.  I can’t even imagine how difficult it was for Hutchinson to write, and publish.  I reviewed the book for my blog, Share My YA, and said about Brave Face:

This book is poignant, honest, and direct. Hutchinson shares his slow realization of his gayness, his decline into depression, his struggles with friendships and relationships, and his suicide attempt and subsequent stay in a treatment facility with blunt honesty and searing emotion.

When I was a teen, my uncle, who worked for Bantam Books at the time, sent me a book called Dee Snider’s Teenage Survival Guide. In it, Dee Snider, lead vocalist of the band Twisted Sister, revealed harrowing experiences from his own teen years that made me realize I was not alone in my teen angst. I cherished that book, and still have it to this day.

I hope that Brave Face does for this generation of teens what Dee’s book did for me. I’m not gay, but I could empathize with Hutchinson’s dilemma of discovering one’s true sexuality, not being able to associate oneself with the stereotype of the Hollywood character in Mannequin or Nathan Lane in The Birdcage. Of not knowing who you are and trying desperately to find your place. Of wanting to just give up because everything feels like it hurts so much.

Brave Face is a hard read. But a worthy read for sure.

So my favorite read this year (so far, anyway) is Shaun David Hutchinson’s Brave Face.  I love that today’s gay teens have a beacon of light to guide them to accepting themselves even if those closest to them cannot.

Jodi Lyn Turchin is an author, high school teacher, photographer, and music enthusiast.  Jodi’s passion for literature in all its forms led her into the classroom, where she has an extensive YA library curated to encourage her teenage students to read for pleasure. She also works with several libraries in the South Florida area to offer creative writing classes for teen writers. Jodi recently completed her Master’s Degree in English with a thesis titled Reimagining Shakespeare in the Young Adult Contemporary Novel. As a writer, Jodi’s work has been featured in local Broward County publications such as South Florida Music News, Rag Magazine, and the Sun-Sentinel newspaper. Her manuscript, Sold My Soul to Rock and Roll, earned an honorable mention in the Society of Children’s Book Writers and Illustrators Florida Rising Kite competition in 2015. It is her connection with the local musicians on the South Florida music scene that helped inspire her book.